Finally a great weather day - as I woke early, I went and sat and watched the sunrise slowly creep across the Drakensburg Mountains - a very special sight.

After breakfast, we drove just a mile or so to a Bird of Prey center for an exhibition of raptor behaviour. They rehab birds at this center, many of which return to the wild. They put on a great show - the demonstrator will release an eagle who then finds a thermal and rides it up a thousand feet or so - at which time out comes a piece of chicken in the trainer's hand. The bird then dives vertically down at terrific speed to grab the chicken, sometimes even in mid-air. Great show.

This afternoon we went into Ladysmith, an hour's drive, to visit a museum and try find a computor store - forgetting that everything shuts on Saturday afternoon. So, lunch at Chickin Lickin, then a slow meander back to Champagne Castle.

Stopped at some gift stores along the way back and found a new car accessory.

Posted by Danni Suskin at 9:44 PM No comments:


Although the day, like yesterday, was overcast and drizzly at Champaigne Castle, we had planned a balloon flight and we determined to get it in. Marc Nuthall, a good friend, had brought his balloon down from Johannesburg as arranged before we left the US.
The Sierras, the Boyntons, the Kennedy's, Bill and I piled into the hotel combi minibus and drove the 40 kms to Winterton to meet Marc. In the valley, although it was overcast, it was dry and dead calm. The flight was great - very, very slow with a net distance travelled of onlya mile or so. No matter, it was great fun - I even got to fly the balloon for a while - a huge 240. After the flight Marc took us to a local B&B for breakfast - very nice place.

After lunch, there was nothing planned, so I worked on the car, and as usual, when someone gets tools out (me in this case), pretty soon everyone is there lending their "helpful" suggestions. One of the hallmarks of these tours are these informal technical sessions around the cars - they are always fun.

Had a nice dinner at the hotel - always lots of good dicussion. These other people from all over the world are really so nice to talk to. Aside from the food, the conversations make dinner realy special
Posted by Danni Suskin at 8:26 PM No comments:

Today we left Dundee headed on a short drive to Champaigne Castle in the Drakensburg Mountains.  Bill drove at first, then I took over.

Intially we were driving through rolling hills, not very steep - bare veld on either side. Once through Ladysmith, it became a little hillier, and then just before arriving at the hotel we encountered a very steep climb - 15% gradient requiring all of low gear.

The mountains are wonderful - high, majestic and today cloud covered - with those clouds that form below the peak and seem like cotton wool on the side of the slopes.

The weather is drizzly - hopefully it will clear up - bu that wetness gives the incredible floral variety such deepness of color it is quite breathtaking.

As always, at every stop or gas station we are mobbed by inquisitive people, all of whom are friendly and usually quite astounded.

This afternoon we will likely go on a hike in the mountains.
Posted by Danni Suskin at 3:48 PM No comments:


Today was switch day - Linda going home and Bill coming in. With this in mnind, we decided to skip breakfast and head out at 7 am, as there was a lot of driving planned - about 120 miles more than the rest of the group to meet up with Antony.

The day was dull, grey and cold. The cloud base was very low, and the mist was thick. As Swaziland is such a mountainous country, we soon began climbing - up an up and by 300 feet we were in the thick o fit. Visibility was dropping rapidly and at 4000 frrt I could only see as far as the flying Lady on the front of the bonnet! Very slow driving - about 10 mpg, and even worse on the downhill. A contant fear of not being seen by a much faster moving vehicle coming up from behind. Two such passes and we had really slowed down. The, we were pulled over by a carload of cops - what could it possibly be? Well, they pulled me over because they just wanted to look at the car! Only in Swaziland. 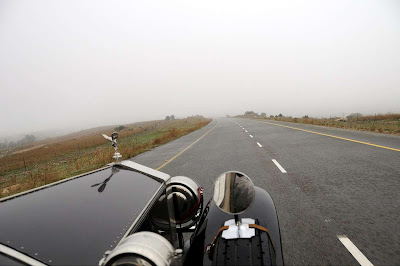 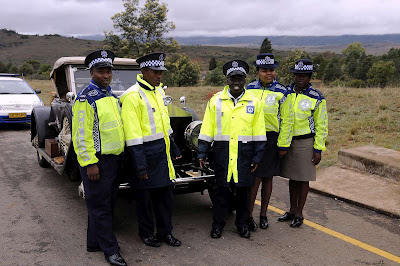 Finally, the border post - we crossed both sides and called Antony. We were running very late - we still had to get to Piet Retief and then Ermelo. Antony, on the other hand was running early - so he drove all the way to Piet Retief and arrived very shortly after us - that saved me the extra 120 miles! Bill now joined the group, but we had to say goodbye to Linda. It's fair to say she had become fast friends with many of the participants and they were sorry to see her go, as was I.

So, now not far behind the main group we set off for the last 150 miles of the day. It went quite quickly, and we arrivd at the hotel in time for a light lunch. We then set off for the local museum, where Bill Kennedy did hios panoramic shot of all the cars - a great sight! A shrt tour of the museum - mining and the Anglo Boer War, and then back to the hotel. 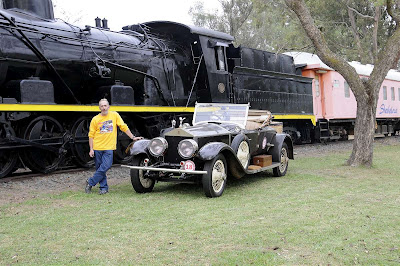 Just before dinner we had a demonstration of a local reneactment group - they showed us weapons from those wars. Interesting. 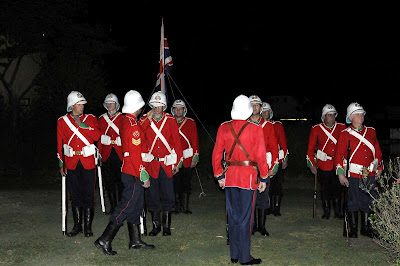 Tomorrow a pleasant drive to the Drakensburg
Posted by Danni Suskin at 11:35 PM No comments:

We slept a little late as the Royal Villas in Swaziland are conducive to that. After we awoke, we found the day to be grey but dry and fairly warm. So, a nice breakfast, following which I cleaned the magneto out of all the shredded parts and took it "offline".

Jaquie and Lynn Boynton invited us to join them for the day, so we hopped into their car to go visit the local market. 160 shack type stalls, each selling African tourist products. At each stall, you are invited in to look, but the pressure to buy is there as you quickly notice the meagre living conditions of these people. So, always willing to do her part, Linda stocked up on Swazi products! 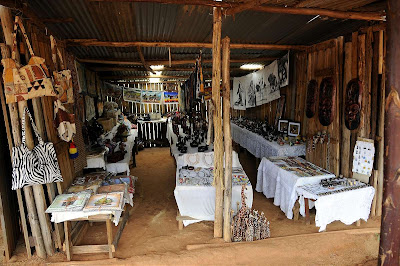 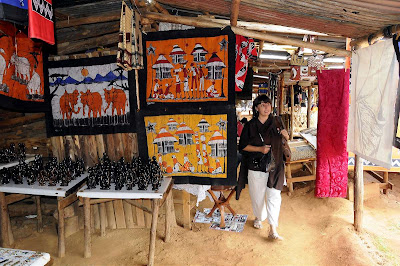 After the market, we headed off to the Botanical Gardens for lunch. Lovely place, with incredible color. The lunch, as you might imagine by now, was terrific - I finally managed to hold back...well at least until I found the carrot cake. Lunch partners were the Buckinghams and Lord and Lady Laidlaw. Had a great time. 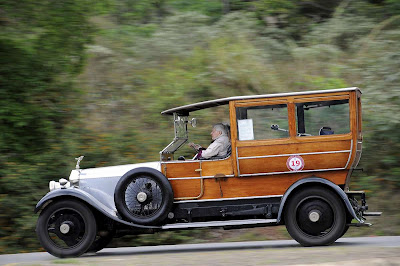 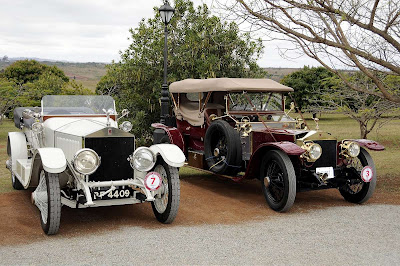 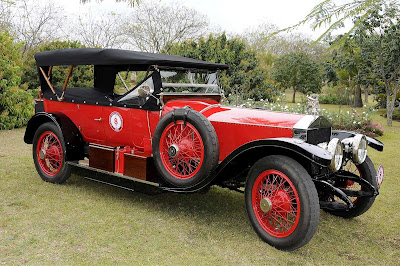 After lunch, by now almost 4pm, we headed back to the villas to relax, the only thing on the agenda being dinner!

Tomorrow, Linda leaves the tour to go back to Atlanta, so I will detour from the tour to go to Ermelo - there I will drop Linda off to meet her brother who is coming down from Johannesburg, bringing Bill "in exchange". Hope he has the magneto parts
Posted by Danni Suskin at 7:46 PM No comments:

Today was a longish drive from Kwazulu-Natal to Swaziland - 205 miles.  After glorious weather yesterday, today dawnd grey, cold and with a promise of rain. Being Yom Kippur, we skipped breakkfast and set off early - only to stop within a mile to put the roof up as the cold wind was a little to penetrating.

The border to Swaziland was just 30 miles - and shortly before getting there we came upon three giraffe at the side of the road. I wanted a photo of them crossing in front of the Ghost, but apparently they did not think it as good an idea. The border was interesting - go inside, present all your paperwork, get lots of stamps, the drive 50 feet into Swaziland and do it all again.

Swaziland is a beautiful country - all mountains, with every hillside scattered with villages of thatched rondavels, kraals with goats and cattle, and occasional stores. People seem to be everywhere, very friendly and very interested in the car.

By now it was raining lightly, so we put on the side curtains - became quite warm and toasty inside. Linda preferred that! 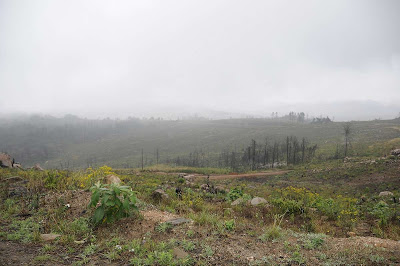 The road to the lunch stop was not good. Full of potholes, it was a switchback mountainous road that climbed to 5000 feet. As we had now ascended into the cloud and mist, visibility was very poor. We had intended to bypass the lunch stop, and we soon realised it was an out and back route - we would have to retrace the same road. So, we turned around. On the descent (in 1st gear all the way to hold the car back), we came upon a terrible accident on that road - the police were just clearing it.

Driving to the hotel, many Ghost passed us on their way to lunch in the direction we had just come from. Needless to say, that created confusion as they all thought they were going the wrong way!

Once at the magnificent Royal Villas we were shown to our villa - and entire house with indoor parking just for us. As they are used by the King of Swaziland, and owned by him, they are spectacular. That did not, however, stop me from servicing the car in the garage and leaving the telltale marking. I will clean it before we leave. In servicing, I found we had suffered the common magneto failure (points destroyed) - managed to call Bill V before he left nad he will bring some - in the meantime I have disconnected the magneto and will run on one ignition.

Another wonderful dinner - good food made better by great company - the Boyntons and Kennedys. Tomorrow is an explore day - likely go to the craft market. No long drive.
Posted by Danni Suskin at 7:10 PM 2 comments: