Today was a magnificent day - fantastic weather and a route that could only be dreamed for.

We left Oudtshoorn soon after breakfast, the crisp morning air buffeting around us in the opne car. The Klein Karoo's emptyness soom gave way to a mountain pass that was not very high, but also wound it's way through rock formations and over a river. The tea stop was at a very nice B&B and they certainly outdid themselves in all the baked goods - served in their back verandah garden under the purple canopy of a blossoming Jacaranda tree. 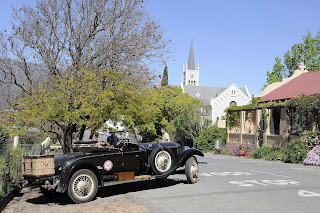 From tea we pressed on south, and soon enough the Karoo was replaced with endless farmlands of the southern Cape - gentle rolling hills surrounded by wheatfields. 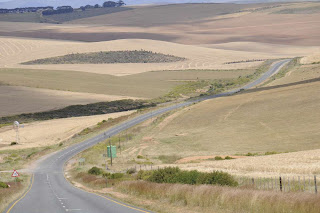 Arniston is a fishing village at the tip of Africa - stark while houses in the Cape style that overlook the absolutely turqiose water of the Indian Ocean against stark white beaches. We pulled into the Arniston Hotel and parked on their front lawn - the ocean providing a magnificent backdrop to Bill Kennedy's panoramic picture. 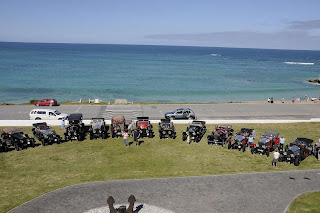 After lunch (calamari, fish and carrot cake!), by now almost 4 pm, we jumped back into the car and set off for another 50 km (100 km round trip) to Cape Agulus - the southern most tip of the huge African continant, Arriving there, we found a stunning coastline and soon made our way to the very tip of Africa - where the Indian and Atlantic Ocean's meet in a swirl of turbulent vortices. A terrific feeling standing there - with the car to one side - definately one of those life moments. 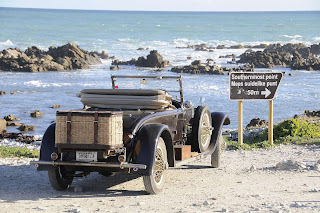 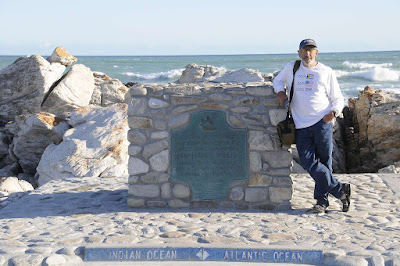 Arrving back at the hotel just in time for dinner we managed to see the last of the sunset.

This was one of the best days on the tour. Perhaps they all are.
Posted by Danni Suskin at 10:30 PM